This week I find myself having to self isolate because a class I taught last week has a pupil with a positive Covid 19 test. Both the pupil and I are fine at the moment.

I asked both my schools if I could teach the lessons from home remotely with an HLTA or LSA as support in the classroom.

This post is about my experiences, what worked, what was difficult and any lessons I learnt.

The class teacher has a desktop computer in his classroom. During lockdown the school brought a plug in webcam to use with Google Meet (part of the #GoogleEdu tool suite). The class teacher found a 2m USB extension cable and installed the camera on top of the promethean interactive whiteboard with some blue-tack. This gave me a very good view of the class and I only moved one pupil to get them into frame. The video quality wasn’t great but it gave me enough of a view to encourage good behaviour.

At home I have a laptop, and more than one monitor, I also have a few webcams but I only used the standard built in one during the lesson. I tend to view Google Meet on one screen and share the other screen.

Welcoming Pupils into the Classroom

As pupils walked in from the playground, they were greeted by me, my face on the interactive whiteboard and my voice coming through the speakers. As they had a staggered starting time over 30 minutes it was very easy to settle them down and reward good behaviour. For much of this time the LSA was trying to gather all the laptops in the suite so it was down to me although I knew the class teacher was just outside (within hearing) if I needed him. If the discipline in the class was not as good then a physical LSA presence at all times would have been a must.

I was teaching a programming module adapted for Google Classroom that is available on my website. The first part involved going over a programming concept, count controlled loops, in this case. Pupils mainly used mini whiteboards to provide individual responses and in some parts of the introduction they acted out algorithms. If I was in class, I would have noted those who struggled easier, however this was much harder as the camera resolution was poor. A widescreen webcam with a higher resolution in the classroom would have helped. The LSA did observe for me and at the end of the introduction I had some idea who I needed to watch and support.

I have this wide screen webcam at home and the picture is much clearer.

When demonstrating the flow of control I used PowerPoints built in drawing tools. This article will show you how to turn these on if you don’t have a touch screen.

I always get rid of the tool bar at the top to maximise screen room but I don’t go into presentation mode as I like the slides order on the right.

During the introduction we left both microphones on. I pinned my presentation so it would remain on the screen even if a sound from the class mic tried to switch views. If the class had been noisier I would have asked the LSA to switch off the class mic.

The mic on the webcam worked really well even though it was quite a distance from some pupils and I could hear pupils questions really easily.

Programming in the Suite

Before they left the classroom to use the laptops in the suite I reminded pupils how to present using Meet. When they logged on in the suite they signed into Google classroom and then joined the Meet with microphones muted. A few minutes of hideous feedback from multiple sound systems and the LSA instructed all pupils to mute their laptop speakers apart from one child’s laptop where we plugged in some better speakers. This enabled me to give disembodied reminders to the whole class.

Predict and Investigate are Google Forms surveys with links to the code in Scratch 3 in the investigate questions. These self mark and I know pupils would find these easy starters in the suite.

As they all had Google Meet open in a tab with their webcams on I could see all pupils through an updated Google Meet Grid View (fix). If they got stuck they said they were stuck on Google Meet in the Chat. I then told them to unmute their mike so they could tell me their problems. I shared my screen lots of time to give demos of skills or code hints.

I know two pupils can be a little work shy so I went into their Google docs to see what they had done and chase their learning. This was very effective.

I enjoyed pupils sharing their work with me through presenting their screens in Google Meet. I made it very clear that they had to wait for my permission to do this. Google Meet now has new controls to so the teacher can limit sharing if pupils won’t respond to instructions but this class didn’t need this, others I teach might.

One class teacher asked her pupils what their experiences had been while in the suite. She said they all really enjoyed it and loved the concept of working with me through Google Meet. Pupils said it was good because if they got stuck they could ask for help quickly and also said it was helpful watching me share my screen, even when it wasn’t aimed at them, because they noticed they had misread or been doing something wrong, so it encouraged them to change and adapt what they were doing.

Support in the Class

After chatting to @Jon_Senior on Twitter I think it is also fair to highlight the importance of the technical support I had in both schools. Teachers and LSAs were great and enabled the learning to go ahead even when things didn’t go exactly to plan.

In my other school we have desktop computers with no mics or webcams. We still used Google Meet but everything had to be done using the chat box or the comments in Scratch. This was harder especially for slow keyboard users. However, a similar amount of work was achieved during the lesson to face to face lessons so most of the class got through that. 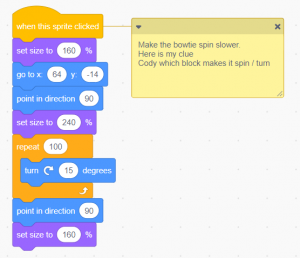 Back Channel in the Classroom

I was only teaching in the classroom for 15-25 minutes. If pupils needed to work more extensively in the classroom, without a digital device each, planning programming on paper for example, I had considered setting up another laptop with plugged in visualiser, who could join the video conference so pupils could show me their written work. Again a strong class presence to help you manage this system would have been important.

With the aid of my class helper I was able to teach at about 95% effectiveness. Far higher than I was able to do during lockdown. The difference was that all pupils had good equipment and internet connectivity. It is no point moaning at teachers if pupils don’t have the kit at home to access quality online lessons. When they do, it can be a much better experience. I now know why lots of my friends who teach in private schools had a better experience. They were able to insist on a minimum level of tech at home, while I was teaching to pupils on phones, android tablets, old iPads that cant be updated, PC’s, internet on the TV without a keyboard etc or just no tech at all. I don’t say this to attack private schools, they did the right thing by their pupils. I do say this to spur the government on to provide devices for every pupil without one if lockdowns and self isolation continues.